Last summer I went up to the LaCloche Mountains with some artist friends.  We stayed in this little place called Whitefish Falls and spent a week painting 'en plein air.'  Actually, my friends spent the week painting... I spent the week starting and abandoning paintings.  By the last day I'd really produced almost nothing of value - and then I managed to squeak out these two small oil studies in one day.

They were done when our group went out to Willisville to paint on location.  I was actually pretty happy with them and wished we were staying longer.  It was my first time painting landscapes, first time painting with oils... and because of my schedule back home in the real world, that was it ...

... until last month, when we all went back to Whitefish Falls again!  This time I was determined to sink my teeth into painting - inspired largely by the discovery of the work of Albert Pucci in a couple of old Grumbacher "How to Paint..." books I had found in a used bookstore earlier this summer (you can read about Albert Pucci on my other blog, Today's Inspiration).   As well, I've been following the progress of a couple of friends, Michael Cole Manley and William Wray, who have been doing some fabulous, inspiring landscape paintings over the last couple of years.

Anyway, things started off quite well... on the first day I managed to get one painting done.

I spent about four hours on this, which was done mostly with palette knife, a technique I was really curious to try after reading the lessons in the Grumbacher books.

Day two (Tuesday) and I'm starting on my second painting, using a burnt umber ground like the one Pucci uses in one of his lessons.  Initially I included the bass boat  you see just beyond my artboard... but I was struggling with this piece, getting more and more frustrated.  Ultimately, my friends advised me the boat was the problem. They said the painting needed a dose of "Boat-be-gone."

So I scraped it out and went with just the natural features in the scene.  This was met with hearty approval from my ' painting advisory committee' and I have to agree.  Sometimes you need to edit your scene or else, as our instructor Richard Edwards explained, you get a painting that actually has two or even three paintings crammed into it.

I passed this old rusted bulldozer every day on my way to get the morning paper at the variety store. Finally, on Wed. morning I went out at 6 AM and sat down to paint it in the rising sunlight. By 9 AM the light was gone so I planned to come back the following morning and finish it - but we had cloudy weather both Thursday & Friday morning. I hope to still go back in and work on this further. Interestingly, it was particularly well-received by a lot of the husbands of the women who were in the painting class!

This is a tough read, I know... its the view of an old abandoned hydro generating station built right into the cliffside on the opposite shore of a waterfall (which is not visible in this angle). The cliff is made of multi-coloured stone and part of the back interior wall of the station is exposed cliff face. Very cool, but probably looks very odd in my painting.

We spent the morning on top of Willisville Mountain, which is to the left of this scene, picking wild blueberries. So I only had about an hour and a half to whip this up. Looking across toward the tiny hamlet of Willisville.

That was my last effort up in Whitfish Falls.  The next day I drove to my friend Wade's family cottage, near Dwight, Ontario, on the Oxtongue River for our annual fishing derby.  I painted the piece below over about three hours on the Saturday afternoon of that weekend.

Oh yeah, and I won the derby! 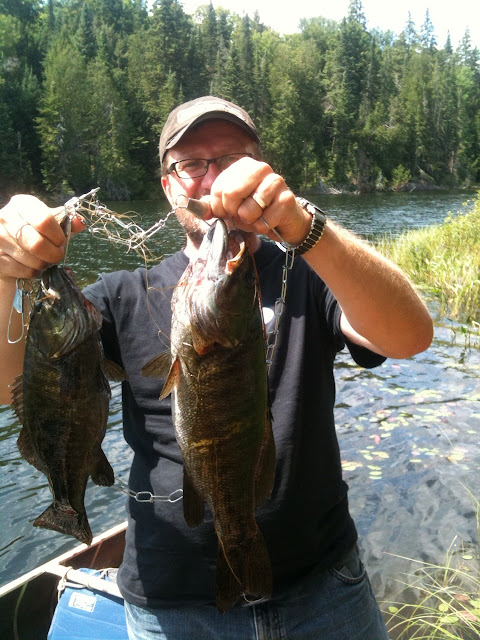 Posted by leifpeng at 4:05 PM No comments:

Connect with me on